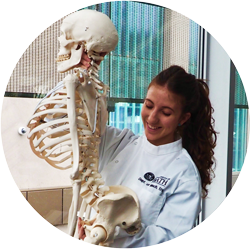 Scientists have found a way to grow ‘replacement’ spinal discs for back pain sufferers who have to undergo surgery. The innovation allows improving on the current treatment that cuts out the pain but also reduces peoples’ mobility.

In 10 seconds? Researchers used stem cells to ‘grow’ new intervertebral discs in test animals. Worn-out discs in the spine can cause chronic lower back pain, and the worst cases are treated by removing the diseased disc and fusing two vertebrae. (Read the science)

So, why is this a breakthrough? Because it improves on the current therapy of ‘spinal fusion’. Lower back pain can be treated with some non-surgical methods, but when nothing helps, the damaged disc between the two vertebrae must go. In such cases, the two neighbouring vertebrae are fused. The result is reduced spinal motion and increased pressure on nearby discs. The proposed new treatment safeguards full mobility and keeps the spine healthy longer! (More on the challenge of creating replacements)

Oh, wow and what is the new wonder-method? Researchers created an artificial disc from naturally degrading, biosynthetic materials and planted stem cells into it. The device mimics the natural intervertebral disc, which is made up of a soft, jelly-like centre, called the nucleus pulposus. This centre is surrounded by plies made up of a more resistant material called annulus fibrosus. In place of the natural ‘jelly’ scientists used a sugar-like synthetic gel, whilst the outer ring was constructed from layers of a high tech polymer and here is where the stem cells were implanted. (More on total disc replacement)

And what do the stem cells do? Well, here is the cool part: the stem cells transform into collagen, the actual material from which both the nucleus and annulus are made of. And, as the materials making up the artificial device gradually disappear, a ‘natural’ collagen structure remains in place. So, we end up with a newly created, natural and healthy intervertebral disc. (Read more on replacement materials)

Was this done in actual people? Not just yet! Researchers performed experiments in lab rats and then in a goat. First, they developed a tissue-engineered ‘disc-like angle ply structure’ for the lower back and near-tail part of rats. They’ve found that after 20 weeks, the replacement discs integrated and functioned similarly to natural discs. Then they implanted a similar device into goats. Here, they’ve found that the disc started to function like a ‘native’ one after 8 weeks. It prevented the fusion of neighbouring vertebrae, kept spinal mobility and coped well with physical loads. (Find out more)

What can we expect in future? The animal study has shown that the range of motion of the spine was well maintained. However, scientists so far have not managed to create devices matching the size of human discs. The next step will be to implant the device into more animals for a longer time. If the results will be satisfactory, scientists hope to start human trials. Eventually, a treatment for chronic back pain that does not limit the range of motion or loading behaviour of the spine will be available. This will allow patients to enjoy their lives the same way people with healthy discs do. (Read more)

The weird thing your spine does

Have you ever noticed that you are taller in the morning than at night?

That is because discs are ‘active’ structures and their fluid content changes over the day.

The intervertebral disc is made up of 70 to 90% water. During the day, as you move around, carry objects, and walk, fluid flows out of the disc.

At night, when you are lying down, fluid is reabsorbed by the disc, returning to its original size.

Recreating the behaviour of the disc is very complicated. For that reason, the best solution is to produce a new disc using stem cells.